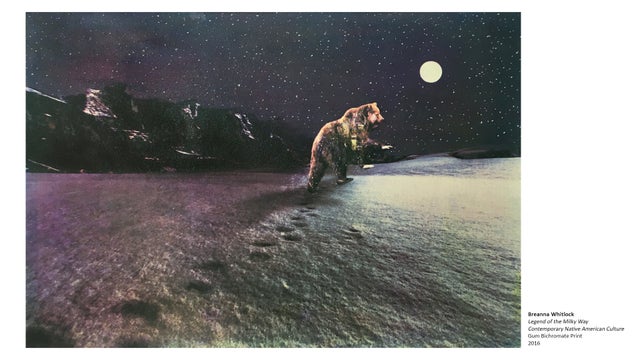 The Legend of the Milky way

No one remembers how it came about that the black bear overpowered the grizzly bear, Wakinu. Defeated, the grizzly bear had to leave his tribe. Wakinu ran on and on. He could not see for the tears filling his eyes; failing to notice, he was running into snow country. The bear ran, hardly touching the ground. Another leap and he found himself in the air. Shaking snow from his coat, he soared high into the sky. The animals that were awake that night saw for the first time, a white trail in the sky. The grizzly really did go to the eternal hunting grounds. The only thing he left behind was the snow from his coat, leaving a white trail in the sky that can still be seen today.

Legends and stories are an integral part of society. They are tools that are used to entertain, teach lessons, and tell a history. However, the Native American stories are not well known. For the most part, these stories remain untold. Instead western society grows up on stories from Europe, such as Cinderella, the Snow Queen, and Jack and the Beanstalk. To begin to understand the many nations of Native Americans, one must first understand their stories.