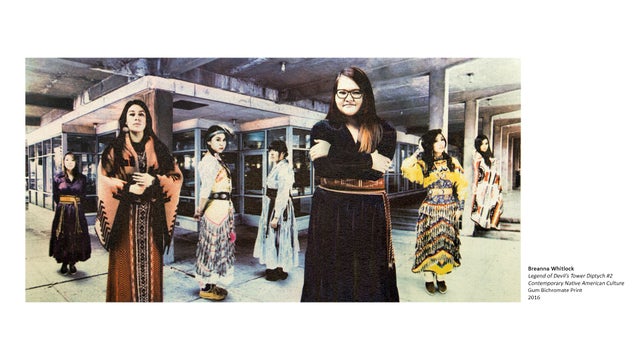 My photography explores Native American societal issues. From the moment foreigners first set foot on North America they tried to eradicate, segregate, assimilate, and now appropriate Native American culture. Despite all this, some of the indigenous cultures have survived and are living contemporary nations. My goal as an artist is to use photography to draw attention to these issues; making viewers aware of the native cultures that once inhabited the land upon which they now stand.

These photographs have been created using gum bichromate printing, one of the few 19th century color printing processes. It was particularly popular among the pictorialist for its painterly quality. Native Americans historically are photographed black and white, printed using 19th century processes, and full of nostalgia. Edward S. Curtis, arguably the most well known photographer of Native Americans, made photographs printing delicate photogravures to capture the fading of indigenous culture. Gum prints are just as delicate but use color. The gum process requires the photographer to split an image into three negatives and print separate layers for cyan, magenta, yellow, and black.. The color combined with a hand printed image makes a new statement about the culture that original monochromatic photographs could not make.

I focus on legends from tribes including Shoshone, Navajo, Arapaho, Crow, Oglala Sioux, depicting the stories in a new way, from a new perspective. I am interested in the overlap of western culture and the indigenous cultures and how the Native Americans have had to adapt to survive. In this overlap viewers find themselves questioning their personal knowledge and beliefs about First Nation cultures.